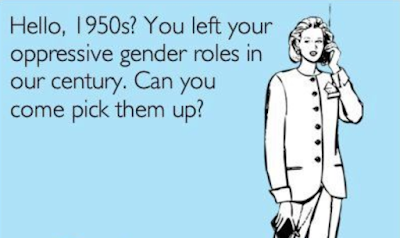 Earlier in my career I was part of the team at Ogilvy that helped American Express create its first-ever campaign targeting women.  The platform was simple: show self-fulfilled women as independent and positive role models using the American Express Card to live a more interesting life.  Soon after, the number of female applicants doubled.  The campaign was even featured in a documentary that aired on PBS showing best practices in marketing to women.  (The oddest part of the documentary experience was having to recreate the creative presentation.   We all said really smart things the second time around.)

Fast forward to today, a time when women make or influence around 85% of purchases, yet often do not identify at all with the women they see in advertising.  Worse than perpetuating a marketing problem, we're unconsciously perpetuating a cultural problem in the media.

Studies show that unconscious bias is formed as early as five years old, as this #RedrawTheBalance video illustrates so powerfully.

Today, the teams at Ford and GTB attended the #SeeHer bootcamp, hosted by @ShellyZalis and the ANA.  It's eye-opening.  Shelley's insights are candid, fact-based, and actionable.  I highly encourage all marketers and their agency partners to go through this experience and learn more about how to use the ANA's GEM Score.

Doing so simply leads to smarter marketing and better results.  Case studies from HP and AT&T show that overall recall, persuasion and effectiveness substantially increase when women and young girls are presented respectfully, appropriately and as a positive role model.

We were happy to learn that the GEM Scores for the advertising created by GTB for Ford exceeds the automotive average.  But being better than average is not our goal.  Now we have a path forward to do even better.