Those who know me know that I am a passionate supporter of Barack Obama's campaign for President.  I talk up his candidacy.  I have been a foot soldier during the primaries going door-to-door.  I've given money.
But I am disappointed that Obama's advisors (and Barack himself) have not yet focused on the meaty issues facing America.  I'm all for change.  But what type of change?  So Barack, and your army of bloggers, here's my plea:  in the spirit of the great brand marketers, embrace one overarching idea and then focus all messages and policies to support this defining idea. 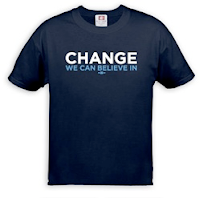 While it is true that Americans want change, we are a fairly risk-averse culture.  What we actually want is to change course toward a destination that is safe and secure.  We want a secure future that inspires optimism.  We want a secure future we can leave to our kids.   Some will argue for a return to a past that seems, in foggy hindsight, to be more secure than today.  But if the past was so good, how did we end up with failing schools, $4.00 gas, war, and melting ice caps?
Barack, focus your candidacy on creating a more secure future for America.  Redefine national security.  Inspire Americans to understand that security goes beyond a strong military and, by doing so, undercut the Republican Party's single issue definition of security.  Focus on five policies that will create long-term economic, strategic and personal security.
Education is a security issue.  Better K-12 education creates economic security when our children are better prepared to compete in the global economy.  Alternative energy is a security issue.  Investing in wind, solar, and nuclear resources will lead to strategic security when the future of the United States is no longer held over a barrel.  Healthcare is a security issue.  Policies, both legislative and market-driven, that make healthcare more affordable will inspire a feeling of personal well-being and security.  The environment is a security issue.  Common sense initiatives that help lower greenhouse emissions will help guarantee the security of our communities, country and planet.  And, of course, military spending is a matter of great national security.  But what we need is a new investment strategy that leads to a more agile force capable of winning asymmetrical conflicts.
Barack?

Anonymous said…
I agree- the speeches sound good, until you realize that he never says anything. It comes down to a base fear of alienating anyone.
I can hope this is a grand strategy of get elected- then make the changes, but after this protracted campaign, it's getting really old.
I'm a huge supporter- but, I wrote this post in frustration:
http://esrati.com/?p=827
July 16, 2008 at 9:43 AM

Anonymous said…
I feel the same way too. I have since switched to Ron Paul, who doesn't use the word Change as much but has talked about many things that bring about REAL change and has the voting records to back it up. Would love to see what your view is on RP.
July 24, 2008 at 12:43 PM