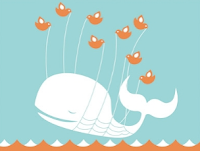 I'm approaching my one year anniversary on Twitter (@wikimurph). My first tweet? "Mountain biking in OC." For some reason I felt the world needed to know that. One year and hundreds of tweets later I've learned the true value of Twitter.

Twitter is a real time wiki. Although Google won't admit it, Twitter is a search engine, not a "poor man's email" as it was recently derided by Eric Schmidt. Twitter allows us to tap into the brainpower of people around the world, trusted advisers and total strangers alike.

Over time I noticed that I've gravitated toward people who write tweets that share knowledge ("just saw a presentation about...), tweets that pass along a provocative observation ("has anyone noticed that..."), tweets that point me toward content I might not otherwise have stumbled upon ("check out this site..."). I am following brand strategists, marketing gurus, social media wonks, designers, pop-culturists from Sydney to Sao Paolo. In turn, I have folks around the world following me, including my two teenage daughters (odd time we live in!).

I know I'll still write the occasional narcissistic tweet ("exciting dive today!"), but I've learned I have to give if I want to get. The community gets better when we share something interesting.

Don Longfellow said…
I love the idea of thinking of Twitter as a search engine... much more dynamic than Google because it can connect me to real people who expert in the areas I care about.

I also like the way some companies have figured out how to use Twitter. Bank of America started a Twitter account last January to handle inbound service requests and outbound product announcements. Imagine using Twitter to sign up thousands of people so you can privately make offers on the products you are trying to clear out before the new products arrive (cars, fashion,...).
March 29, 2009 at 8:22 PM

Anonymous said…
i think it is also a more advanced version of yahoo answers, twitter can also be the fastest way to burn your brand online.
April 14, 2009 at 7:36 AM

Fiona Canavan said…
This is true. I also agree with the comments above it's intersting to see how some companies are using Twitter. At the Technology Studio we've also used it to connect to others who attending the same events. So it can help with face to face interactions too. Rather than attending an event with a room full of people knowing you want to talk to some, you 'Tweet' and hey presto the most interested people respond. A pretty efficient way to do business.
April 14, 2009 at 8:03 AM

Danny Clayton said…
Well said. In the few months I've been using Twitter, I've had more fun observing behaviors than actually tweeting. Personally, it's far more useful to follow relevancy than build a gargantuan follow list, a mistake I made with Linkedin.

As I evangelize about Twitter, I usually preface it by saying that it could be the acid washed jeans of the internet where we wonder in a couple years just what the heck we were thinking, but I doubt it.

I know I'm in trouble when I have to sit and stare at the screen trying to think of something to tweet. That's my indication I should just shut up and go ride my bike. Then I can tweet.
April 14, 2009 at 8:08 AM

Anonymous said…
True words. It's a drastically different service when it's used as a truly SOCIAL media outlet (i.e. two-way exchanges of information) instead of simply a tool to share your every experience. I still think many people have yet to learn the value of the search function on Twitter and it's this differentiation that separates casual users from Twitterers on a mission, if you will.
April 14, 2009 at 8:38 AM

Techietami said…
I tend to use Twitter in 3 ways:

The people I follow are either friends/acquaintances, people I currently do or would like to do business with (or whom I would like to refer my services) and news-type organizations. I follow both local and national news so I can keep an eye on what is going on.

I have been selective about what updates go to my portable device and what I read on my computer through TweetDeck. My portable device is only getting updates from those I want to know right now (local news, certain friends, etc).

I am currently experimenting with TweetDeck and appreciate how it arranges information in columns and how I can have it track searches for me. I have searches set up for groups I am in, my business, and subjects that concern my business.
April 14, 2009 at 9:49 AM